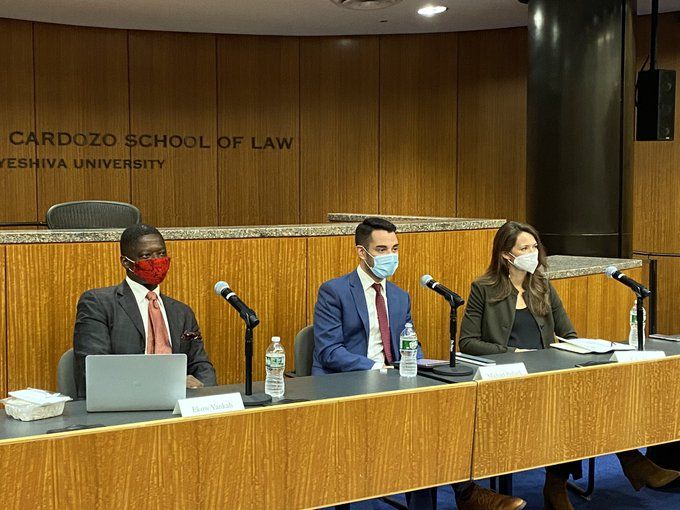 “With the opportunity to have full audio access to all proceedings, this year’s Supreme Court term will be unique,” Professor Kate Shaw highlighted in the Floersheimer Center’s Annual Supreme Court Term Preview. Shaw was joined by Professors Michael Pollack and Ekow Yankah to present and analyze some of the most notable cases on the Supreme Court’s crowded docket.

Yankah kicked off the session with his analysis of cases spanning criminal justice, police reform, the death penalty, and the role of media exposure in jury selection. In the prominent case of United States v. Tsarnaev, the Court will rule on whether the district judge presiding over the trial of Dzhokhar Tsarnaev, one of the Boston Marathon bombers, erred in not asking each prospective juror about their exposure to media coverage about the case.

Yankah argued that with easy access to news via social media so pervasive in American society, it seems impossible that there would be prospective jurors that had not heard a great deal about the case. “This was so public. It gripped the entire country,” Yankah remarked. “Is it really possible to get a fair trial in a world where everyone gets their news instantly on social media?”

Pollack, who is co-director of the Floersheimer Center, discussed Students for Fair Admissions v. President and Fellows of Harvard College, which explicitly asks the Court to overrule Grutter v. Bollinger – a landmark decision where the Court ruled that a student admissions process can consider race so long as it also takes into account other factors. If the Court does overrule Grutter, race would no longer be a permissible consideration at all in student admissions.

Students for Fair Admissions represents Asian American applicants to Harvard, who argue that they have been discriminated against in its admissions process. “Is the constitution ‘color blind’ to the extent that it requires ignoring race even when ignoring race produces more structurally racist outcomes?” Pollack questioned with regards to the ability of Grutter to protect underrepresented groups in admissions. “I think at least four justices – and it only takes four – will be interested in granting this petition.”

Shaw commented on a number of consequential abortion cases, including several challenges to Texas Senate Bill 8, which bans abortion after the detection of fetal cardiac activity – typically around six weeks. After the Supreme Court declined to block the bill last month, the Justice Department filed suit, and the district court granted the federal government’s request for an injunction just hours after the Floersheimer Center’s preview, an injunction that was subsequently stayed by the Fifth Circuit. “It’s not yet clear whether the Supreme Court will weigh in on SB8, but it seems likely,” said Shaw.

On December 1, the Supreme Court will hear Dobbs v. Jackson Women’s Health Center, a challenge to the constitutionality of a Mississippi law that bans abortion access after 15 weeks of pregnancy. “If the Court rules in Mississippi’s favor, that will open the door to other states limiting abortion access,” said Shaw. “If the composition of the Court does not change, it feels almost certain to me that this is the path the Court will head down.”

To view a video recording of this event, please click here.