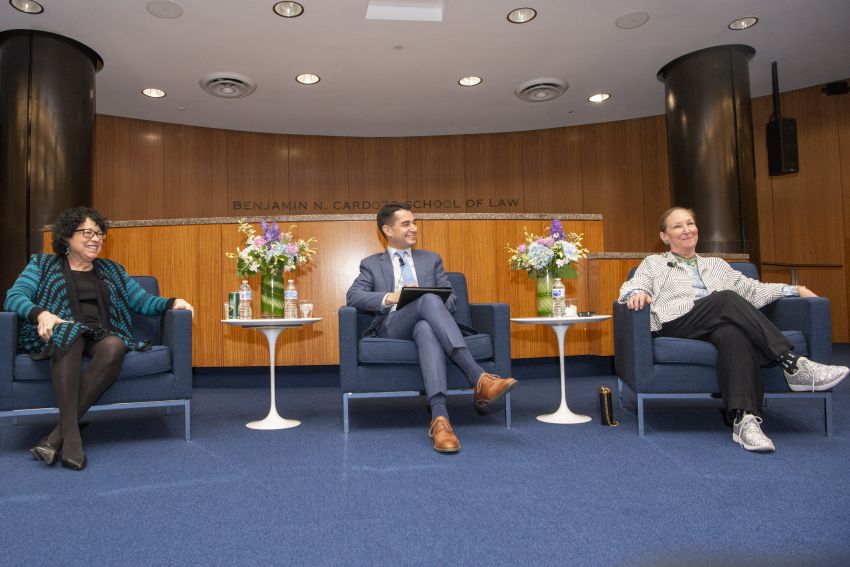 United States Supreme Court Justice Sonia Sotomayor and Canada Supreme Court Justice Rosalie Abella gave Cardozo students their perspectives on the fight for equal rights, a lesson in comparative constitutions and stories of life experiences that have aided them - two of the most powerful women in the world - in their pursuit of justice through the law.

On Wednesday morning, Justice Sotomayor sat with her former law clerk Assistant Professor Michael Pollack and the Cardozo 1L class to talk about her life, her inspirations and the obstacles she has faced in her legal career.

Pollack started the discussion by saying that when he was interviewed for his clerkship, “she wanted to know me as a human being. She, in fact, deeply cared about who I was.”

He said this interaction exemplified Justice Sotomayor’s focus on the human aspect of the law, which has been a constant throughout her career.

When asked by a student what she hoped to be remembered for, Justice Sotomayor said: “caring.”

As a young lawyer Justice Sotomayor knew she wanted to be a judge. Growing up in the Bronx during the civil-rights era, she said she was impressed that Southern lawyers and judges, who had been raised in a segregated society, risked their lives to defend the law and seek racial equality.  “I wanted a chance to be that brave,” she said.

After a lunch with students and faculty members, Justice Sotomayor joined in a spirited conversation with Justice Abella in the Jacob Burns Moot Court Room. Dean Melanie Leslie welcomed the justices and set the tone by highlighting the law school’s yearlong series Women’s Votes, Women’s Voices, which commemorates the 100th anniversary of the ratification of the 19th Amendment. “Our idea was not simply to celebrate individual women and the fight for equality,” the dean said, “but to seek to understand the lessons of these hard-fought battles for equal rights and to apply them for all people in all democracies around the world.”

The supreme court justices delivered a nearly 90-minute tour de force on the subject, comparing the paths to equality in their countries and the struggles they see ahead. They highlighted the disparity in the number of men and women on the U.S. bench and the highest levels of the legal profession.

Justice Sotomayor responded to a student question, saying, “There are still many barriers to break.” She discussed her early career, saying, “the ceiling that was going to be the hardest to break was not race, it was gender.”

“It wasn’t my plan. I was going to go to a law firm,” Justice Sotomayor said. But Morgenthau promised her trial experience, and that changed her mind. “You have to be open for opportunity when it knocks on your door,” she said.

Asked for advice about areas of law to pursue, Justice Sotomayor said, “Every area needs people who are passionate and interested in what they’re doing.” More specifically, she said that immigration law, cybersecurity and privacy law are areas that are in high demand for lawyers.

In the morning session, a student asked Justice Sotomayor what her reaction was when she found out she was nominated to the U.S. Supreme Court.

“I am the toughest New Yorker you’ll ever meet,” she said, but when President Obama told her the news over the phone, “I started to cry.” She described the next year of her life as an “out-of-body experience.”

Another student asked about the most difficult part of her job.

“Most people think that the law is black and white… the first thing you realize is that it’s not,” Justice Sotomayor said. “The law is not moral justice. Every case that comes before us has a winner and a loser. I try to remember that.”

She stressed that lawyers have a responsibility to stand up for what’s right.

“Laws are made by people, and if they’re unfair or unjust, they have to be undone by people,” she said.

Justice Rosalie Abella said her life experience has been critical to her success and outlook. She was born in a refugee camp in Germany at the end of World War II, a child of Holocaust survivors. Along with her parents, she immigrated to Canada when she was a child. Her father had been about to become a judge in Germany when the Nazis came to power.

“I decided I was going to become a lawyer because of my background,” Justice Abella said. She added that her Jewish heritage and her former refugee status instilled in her a “fearlessness of speaking out.”

Justice Sotomayor also discussed the influence her ethnicity has on her law-making decisions.

“I want to do a good job not because I’m Latina but because so many people are affected by the law,” she said.

As she did in the morning session, Justice Sotomayor walked up the stairs and through the aisles of the moot court room, shaking hands with the students she passed and posing for photos with those who asked questions of her.

One student asked the justices what could be done to decrease gender inequality in the legal profession. Justice Sotomayor agreed it was still a challenge.

Justice Abella pointed out that as a 200-year old country, the U.S. should no longer be aiming for “firsts” and said that Canada has many more female judges. She said Canada’s age limit of 75 for justices allows for a fresh approach and new ideas.

Justice Sotomayor said that the lifetime tenure of justices in the U.S. makes it difficult to have a judiciary that is representative of a changing population.

Both justices also talked about the value of respecting opposing opinions and staying open minded.

“What I realized as I’ve aged was there’s a difference between an empty mind and an open one,” Justice Abella said. “As judges we must be open to opinions and arguments that we may not agree with.”

Justice Abella described the Canadian Constitution as a “living tree,” adding that constitutions shouldn’t be given a technical interpretation.

“They should grow with time,” she said.

The justices offered advice for students starting their legal careers, stressing that they should remain connected to their true selves, and be compassionate in making judgments. “The ceiling is not the ethical rules, the ceiling is you,” Justice Sotomayor said.

Justice Abella agreed: “Be yourself no matter what… People will try to change you in the legal profession.”

During the panel, Justice Abella also pointed out her son and Cardozo alumnus Zachary Abella ‘07, LL.M., in the audience.

Justice Sotomayor said that in all of her positions, she looked for “people teaching me something I don’t know in a way I admire.”

She added: “You have to go in with your own sense of self.”