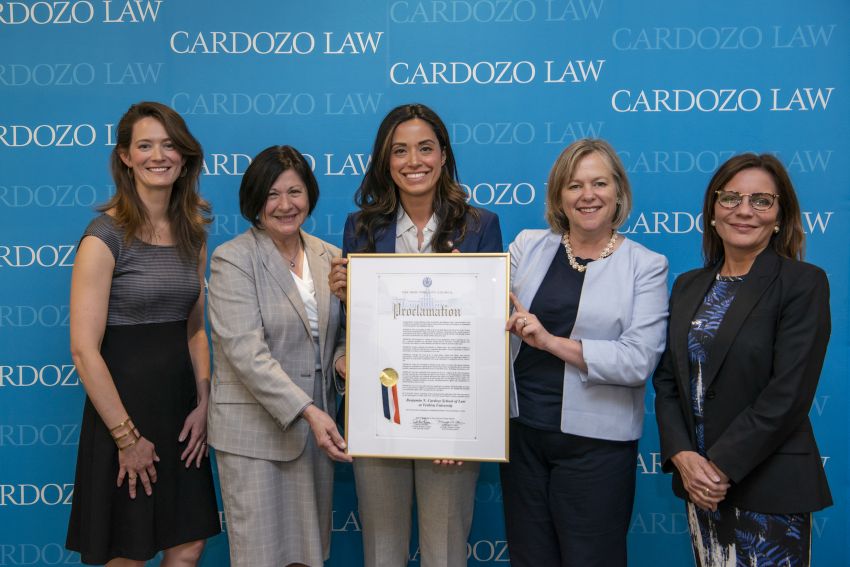 Cardozo’s yearlong “Women’s Votes, Women’s Voices: The 19th Amendment at 100” event series kicked off on June 4, 2019 – exactly 100 years since the United States Congress granted women the right to vote by passing the 19th amendment on June 4, 1919.Dean Melanie Leslie started the night by paying homage to the martyrs of the suffrage movement. She said the goal of the series is to reflect on how far women’s rights have come.

“The 19th Amendment was a step toward light, but, as we will examine throughout this series, there are still many steps we must continue to take as we make our way through the darkness,” Dean Leslie said.

Dean Leslie introduced New York City Councilwoman Carlina Rivera, who represents Cardozo’s corner of the East Village neighborhood, among others on the Lower East Side. Rivera presented Cardozo with a proclamation honoring “Women’s Votes, Women’s Voices” and Cardozo’s commitment to commemorating this day in history.

In her speech, Rivera praised Cardozo for upholding the ancient Jewish tradition of bettering the community. She stressed her commitment to advancing inclusivity in social justice, and giving women the opportunity to help others. “We’re looking good,” she said. “But we have a long, long way to go.”

The theme of female empowerment continued as Professor Kate Shaw spoke of interpreting the 19th amendment as “more than just the ballot.” Shaw discussed her research for Reproductive Rights and Justice Stories. Shaw co-edited the book, which explores the evolution of women’s reproductive rights, ranging from decisions around having children to employers providing pregnancy accommodations.

Valerie Paley, Ph.D., offered attendees a unique historical perspective on the event. Paley is Senior Vice President and Chief Historian at the New-York Historical Society and Director of the Society’s Center for Women's History at the Museum & Library, where her mission is “to make women’s history integral to American history.” Paley mentioned a few lesser known female narratives to shed some insight on the past. Cardozo’s geographical connection was brought up again as Paley spoke of women handing out suffragist flyers at nearby Union Square. “Our sisters over time have been overlooked in historical record,” she said. “Women are as emboldened as ever before.”

Details on further events in the “Women’s Votes, Women’s Voices” series, which continues through August 2020, will be released over the next few months. To follow along, join Cardozo on Twitter, Facebook, and Instagram, and use the hashtag #19at100.