Cardozo Hosts Leading International Scholars and Advocates for “The Parthenon Marbles Case and the Universal Museum Myth: Policies and Politics”

Cardozo Hosts Leading International Scholars and Advocates for “The Parthenon Marbles Case and the Universal Museum Myth: Policies and Politics” 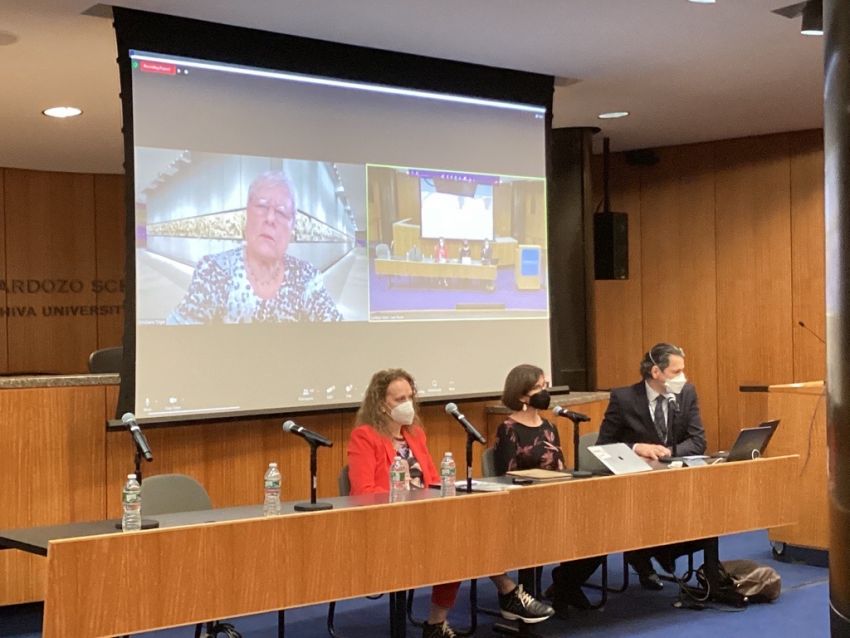 On April 28th, the law school hosted a day-long symposium on the legal, ethical, and political dynamics surrounding one of the major cultural property disputes in the art world. Leading scholars, government ministers and cultural advocates discussed the arguments over the rightful ownership of the Parthenon Marbles, which were taken from Greece by England during the British Colonial period. Professor David Rudenstine’s decades-long research concluded that the statues should be returned to Greece, and his analysis provided the framework for much of the symposium.

The Sculptures, the most significant art from antiquity, were removed from the Parthenon and taken to London in the early 1800s by the British ambassador Lord Elgin under an agreement with the Ottoman Empire, who controlled Greece in the early 1800’s. They are currently on display at the British Museum. Authorities from the Museum declined to participate in the symposium.

Professor Rudenstine worked closely with the editors of the Cardozo Arts & Entertainment Law Journal (AELJ), one of the top Intellectual Property journals in the country. The AELJ co-hosted the event along with the Benjamin B. Ferencz Human Rights and Atrocity Prevention Clinic and the FAME Center.

Rudenstine, the Sheldon H. Solow Professor of Law and former Dean of Cardozo, presented his historical article “Trophies for the Empire: The Epic Dispute Between Greece and England Over the Parthenon Sculptures in the British Museum,” which was published in a recent edition of the AELJ. The article finds no evidence that establishes that Ottoman officials gave Elgin prior or subsequent written permission to remove the Parthenon Sculptures from the edifice.

Panel 1 began with moderator Samantha Anderson ’16 and panelists Elena Korka, Honorary Director General at the Antiquities and Cultural Heritage of the Hellenic Ministry of Culture and Sports; Giovanna Bellesia, Department Chair of Italian and German Studies at Smith College; and Professor Rudenstine discussing the history of the removal of the sculptures.

“There is no evidence that Lord Elgin wanted to take the sculptures as the British Museum suggests,” said Rudenstine. “The evidence we have suggests that all he wanted to do was to measure, draw, paint and mold the sculptures.”

Panel 2 centered on whether the British Museum should return the Sculptures to Athens, moderated by Michael McCullough and featuring panelists Irini Stamatoudi, Professor of Law at University of Nicosia; Elizabeth Marlowe, Associate Professor and Program Director of Museum Studies at Colgate University; and Kris Tytgat, President at the International Association for the Reunification of the Parthenon Sculptures. “Should it matter if this was a colonial-era theft?” McCullough asked. “And if so, who should get involved? The United Nations UNESCO, British Law?”

“If you want to make progress, you have to set up the system,” Stamatoudi answered. “We can look at NAGPRA for precedent in the United States, where Native American communities worked with museums to resolve these issues,” Marlowe echoed.

During the luncheon address, Lina Mendoni, the Minister of Culture and Sports in the Cabinet of Kyriakos Mitsotakis spoke to attendees about the “blatant act of serial theft” by Elgin. The removal of the Sculptures, she said, “distorts and impairs the messages and symbolism of the Parthenon itself.”

Panel 3 covered “The Universal Museum Myth,” moderated by Stamatoudi. Korka, Patty Gerstenblith, Professor at DePaul College of Law and Joe Baker, Co-Founder and Executive Director of the Lenape Center served as panelists. Gerstenblith is a renowned scholar and expert on cultural heritage law and restitution.

“We want to use this opportunity as the last panel of the day to talk about practical next steps,” said Cobden. Amineddoleh and Kaye agreed that litigation is not the best mechanism for cultural property disputes. “I think many of these disputes are solved outside litigation, but we just don’t hear about them,” Amineddoleh said. “I'm hopeful about those private settlements and negotiations.”

The organizers of this event were Professor Stamatoudi, Elena Korka, Professor Rudenstine and the staff of the AELJ.