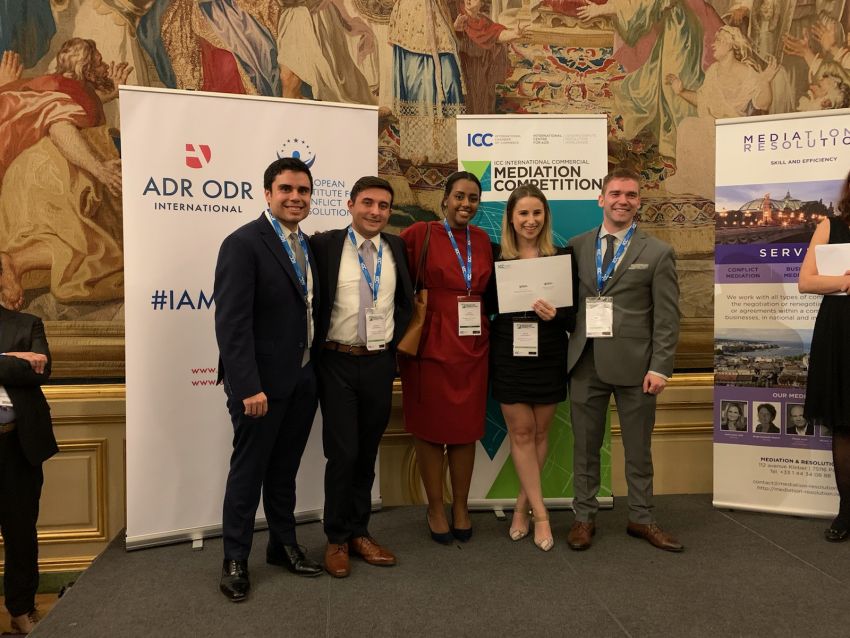 The ADR Competition Honor Society's team competed at the 15th ICC International Mediation Competition in Paris. During the competition, student teams representing 66 universities work to resolve international business disputes through mediation, guided by professional mediators. Their performance is evaluated by some of the world’s leading dispute resolution specialists who participate in the competition as judges.

There were 66 student teams competing, representing 33 countries. “We are very excited and motivated by the results of the 15th Annual ICC Mediation Competition," said 3L student Lu Stefanos. "Part of the difficulty with succeeding in an international competition like this is understanding cultural differences, and it was a true testament to the competitors’ skill that they were able to navigate these differences while still advancing their interests as parties.”

At the New York Law School IP competition, two teams competed, composed of 2Ls Joanna Tulman and Marisa Masters, coached by 3L Lauren Gershoni, and 2Ls Michael Silbert and Nicholas Taltos coached by 3L Alexia Landesman. Alexia's team won second place overall in the competition, with the assistance of Lauren's team, who helped them go through the semi-finals fact pattern in just a half hour.

2Ls Karolina Katsnelson, Sean McLaughlin, and Elan Stiberman competed at AAA Arbitration in NYC and they were coached by 3Ls Lauren Cohen and Dean Linn.