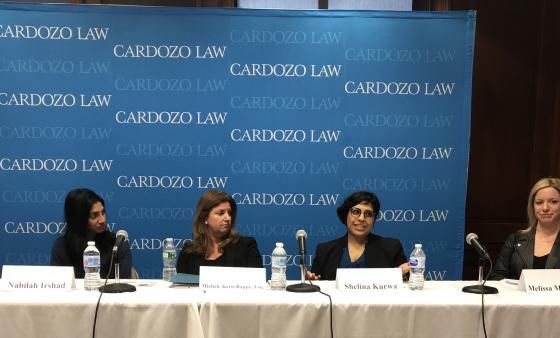 “Tech is a place where one point of view dominates,” said Shelina Kurwa, Technology Media Associate at Proskauer Rose LLP. She said women often practice taking on others’ perspectives, which can be an asset in the evolving world of technology.

Nabilah Irshad, VP of Legal & Business at NewsCred, agreed that female attorneys bring a unique worldview. “We’ve always had to be more thoughtful,” said Irshad, who works on a variety of facets of the technology field, including privacy regulation compliance and data protection.

Melissa Moriarty, Assistant General Counsel at VaynerX, agreed that women shouldn’t be intimidated in an often male-led workplace: “You deserve to be there. Use your voice.”

“That very vehicle that caused the problem, if you’re creative, can be used to solve it,” she said.

The multiple components of technology law sparked the idea of founding WiTL at Cardozo. The fireside chat was the student organization’s first event as an official group. They are the first chapter on the east coast.

“I think we are a good representation of what students are looking for,” said 1L Rebecca Kravitz, one of the group’s three co-founders, which also include 1Ls Andrea Wrisley and Leah Murphy. She hopes students can walk away from WiTL events with new connections.

Wrisley said the group is an important addition to Cardozo, after the flagship chapter at UC Berkeley, to reflect New York’s growing technology presence.

Murphy agreed: “It’s pretty cool to be part of a national network like that… Silicon Alley is the next biggest market.”