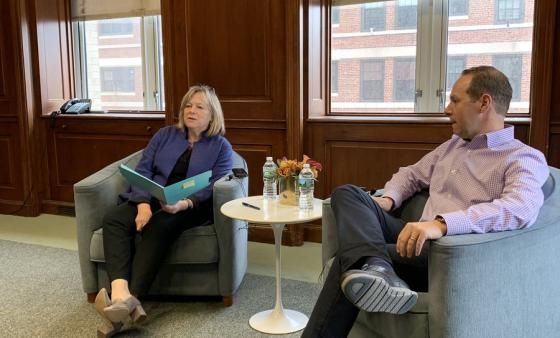 Dean Melanie Leslie interviewed Randall Rothschild ’97 on April 9 as part of the Pathways speaker series. Rothschild discussed how Cardozo prepared him for a career in the real estate industry. His roles have evolved from law to business and finance, and he offered tips for how to maintain a good work-life balance.

Dean Leslie started off the conversation by congratulating Rothschild on his 20th wedding anniversary. He met his wife while they were both students working in Cardozo’s Bet Tzedek Clinic. Back then he thought he would be a litigator, but now he says, “real estate was made for me.”

Rothschild is a Managing Director and Global Head of Debt at Tishman Speyer, the real estate firm behind many prominent New York City projects including Yankee Stadium and the Spiral skyscraper in Hudson Yards. Rothschild oversees global debt financing, which he describes as interacting with lenders, working through timelines and understanding what will be built to find the best solution for the client.

“I was on the front lines,” Rothschild said of his work at smaller firms, which he said offered more responsibility and opportunities to learn. “I viewed every deal we worked on like a puzzle.”

Rothschild credits Cardozo for teaching him both hard and soft skills, such as working with different people and being part of a team. “I really enjoyed the people I worked with,” he said.

As an attorney and a father, Rothschild shared some of his struggles with work-life balance. He said he once pulled eight all-nighters in the span of a month. Because of Rothschild’s hectic work schedule, he carves out extra time for his family. He once even took his daughter to Times Square at 2 a.m. for an event.

His advice is not to worry about everyday problems.

“You can’t take it too seriously.”