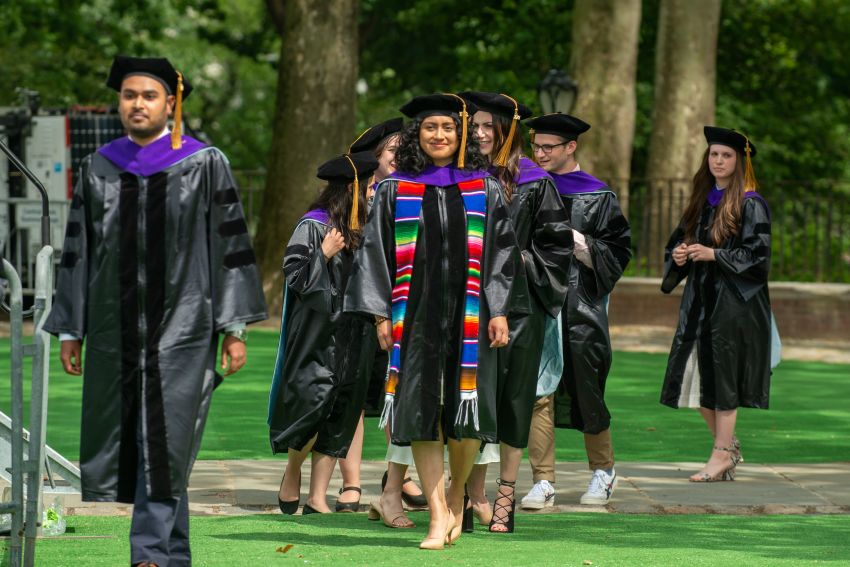 Sunny skies appeared over New York City on Tuesday, June 1 just in time for Cardozo’s 43rd Commencement, as Dean Melanie Leslie told the class of 2021, “you are the bright light around which our community focuses today, in a spirit of celebration and pride.” It was an event like no other in the school’s history, marking the first time in 15 months that most students were able to see their classmates in-person, in an open-air ceremony in Central Park, where hugs, handshakes and laughter became moments of infectious joy. After over a year of virtual learning at the law school due to the COVID-19 pandemic, state and city regulations were lifted, allowing for a graduating class of 321 J.D. students, 52 LL.M. degree recipients, and one student, receiving a J.S.D., the legal equivalent of a Ph.D.

Professor Christopher Buccafusco served as the herald for the day, and welcomed the class and their guests. In her remarks Dean Leslie praised the class of 2021 for enduring the fear, isolation and hardships of the past year with determination and grit: “I’d like you to think back to the day you started at Cardozo. Visualize where you were, many of you in the Moot Courtroom. You were looking at the people around you, wondering, who are they? Who are my friends? What were you thinking?...One thing you were not thinking was that in 15-18 months there would be a worldwide pandemic that would turn you upside down and would change and challenge everything you thought you knew about the world.”

Dean Leslie spoke of the last in-person event at Cardozo in February 2020 when U.S. Supreme Court Justice Sonia Sotomayor and Canadian Supreme Court Justice Rosalie Abella visited Cardozo, just three weeks prior to the law school and New York City shutting down in response to the pandemic. She drew parallels from their stories of overcoming adversity through optimism, fearlessness, compassion and grit.

“Little did we know how much we would need those lessons. These last 15 months have tested you. But you got through it. You got to this day,” she said. “You learned to focus on what you could control and to find hope for the future as you surmounted each obstacle. And in the midst of great uncertainty, tumult and upset, you kept going….you are ready to face challenges that seem insurmountable and overcome them! You have proved it.”

Canadian Supreme Court Justice Rosalie Abella addressed the graduates virtually as this year’s keynote speaker, offering inspiring words as she talked about her own journey into the world of law. “I’ve always seen lawyers as democracy’s warriors, the people who protect rights and justice,” said Justice Abella. “Without democracy there are no rights, without rights there’s no tolerance, without tolerance there’s no justice and without justice there’s no hope.” Justice Abella is the first Jewish woman, and the first refugee to sit on the Canadian Supreme Court bench. She was born in a displaced-persons camp in Germany after World War II, to parents who survived concentration camps. She was one of only five women in her University of Toronto law school class and is the longest serving Supreme Court Justice in Canadian history. A leading champion of human rights, Justice Abella was appointed to the Supreme Court of Canada in 2004 after serving on the Ontario Court of Appeal for 12 years. She told the graduates, “The public trusts us to protect justice….Justice is of the people and for the people and you as lawyers must deliver it to them fearlessly.”

Yeshiva University President Rabbi Dr. Ari Berman addressed the graduates saying, “I want to thank you for the responsibility and care you’ve displayed this year. The fact that this is so joyful is not simply because it’s in person, it represents something bigger, because you represent something bigger. Each of you is a potential hero in the great story of humanity, each in your own way with your own distinct qualities and strengths. You’ll have great opportunities for impact, to be an influencer in very public and private ways, in grand scales and in quiet kindnesses. Seize those moments. Be the hero in somebody else’s life; be the hero our society needs.”

Enekelda Smakaj, who earned an LL.M. degree, told her classmates to “Lead with law! Kindness and compassion will always have a significant impact in this world. I would like to congratulate all the graduates – be proud!”

J.D. student speaker Taylor Dumpson said, “we developed tunnel vision amidst the darkness of COVID and met our challenges face-to-face. We took on journals, clubs, clinics, externships and began our concentrations. We challenged systems and structures and asked complex questions likes what does justice look like? We learned that law is not always black and white and learned how to tackle the gray areas.”

SBA President Andrew Windsor said, “we wouldn’t be graduating without the support of many in this audience, and thanks to everyone who supported us through our law school journey.” Windsor announced the faculty winners of the SBA awards, which included Best First Year Professor Michael Pollack; Best Adjunct Professors Brian Farkas and Jillian Gautier; Best Administrator Dean Carey Bertolet Grand; Outstanding Assistance to the Student Body Award Winner Dean Jenn Kim; and Best Professor Stewart Sterk. “Soon we'll be doing the work we believe in, thanks to these award recipients and the rest of the Cardozo faculty. We’ll get there soon, but now it’s time to celebrate!” 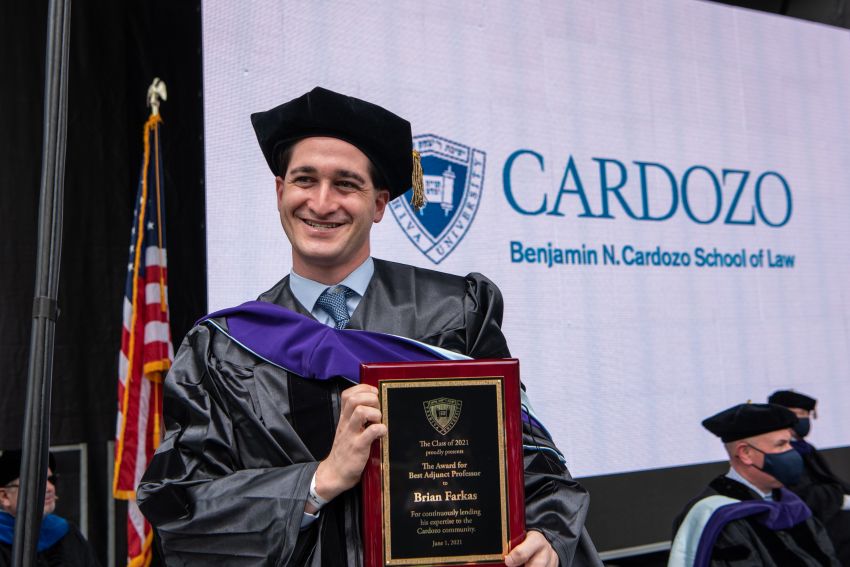 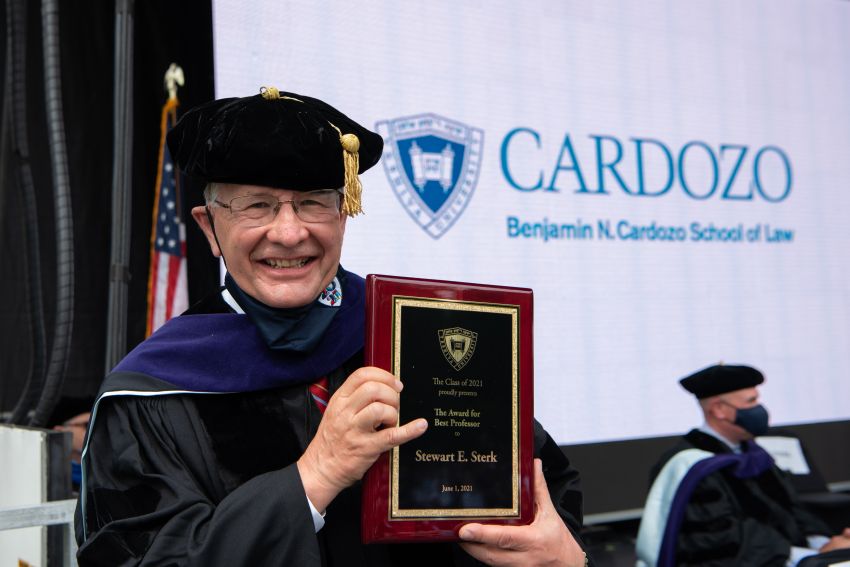 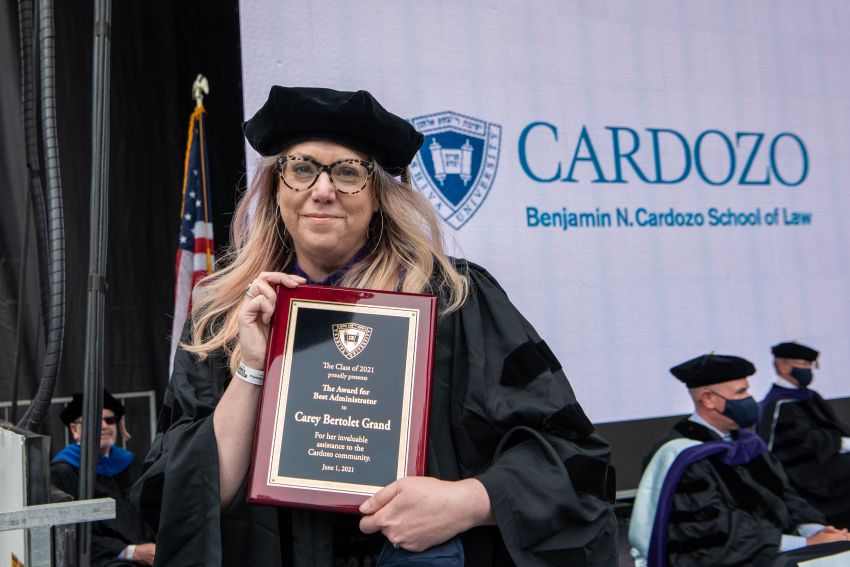 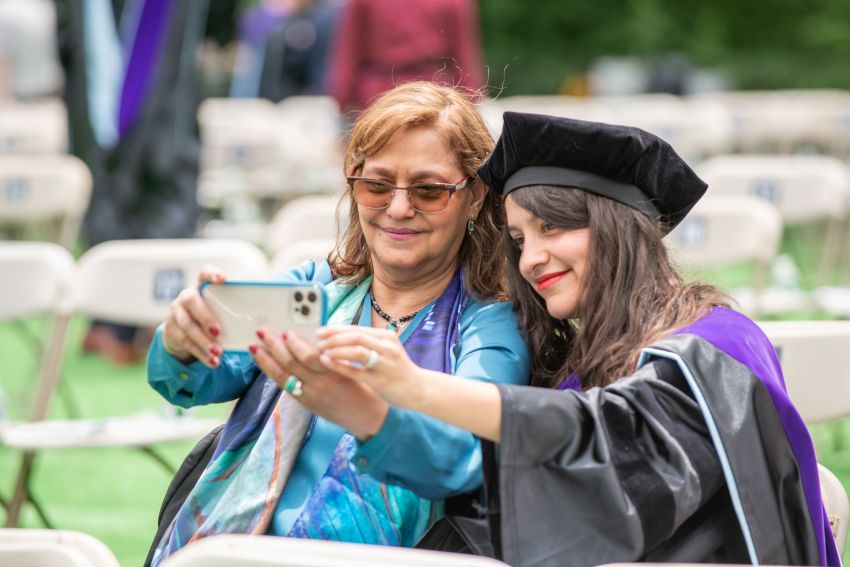 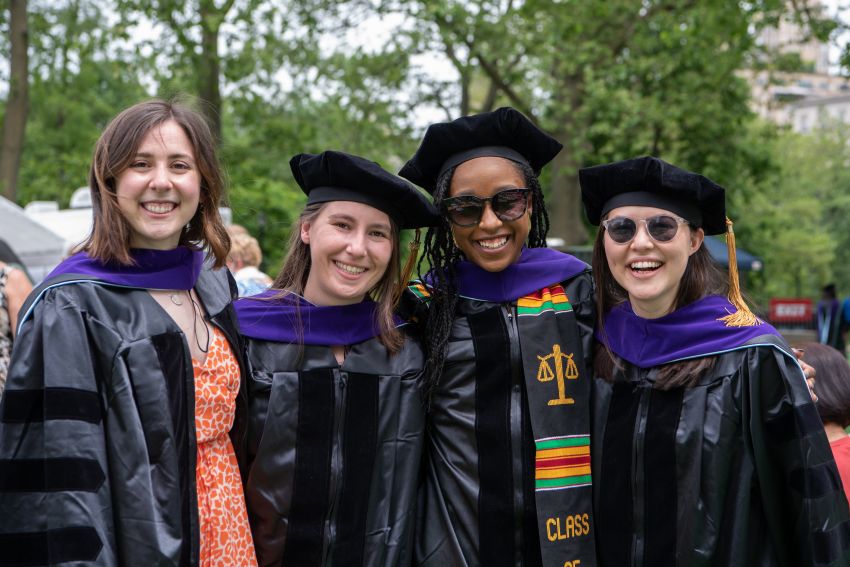 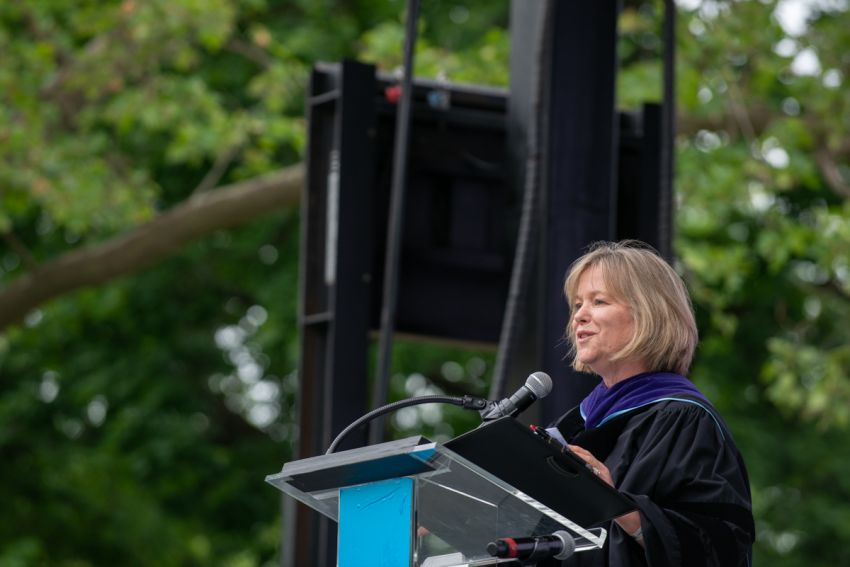 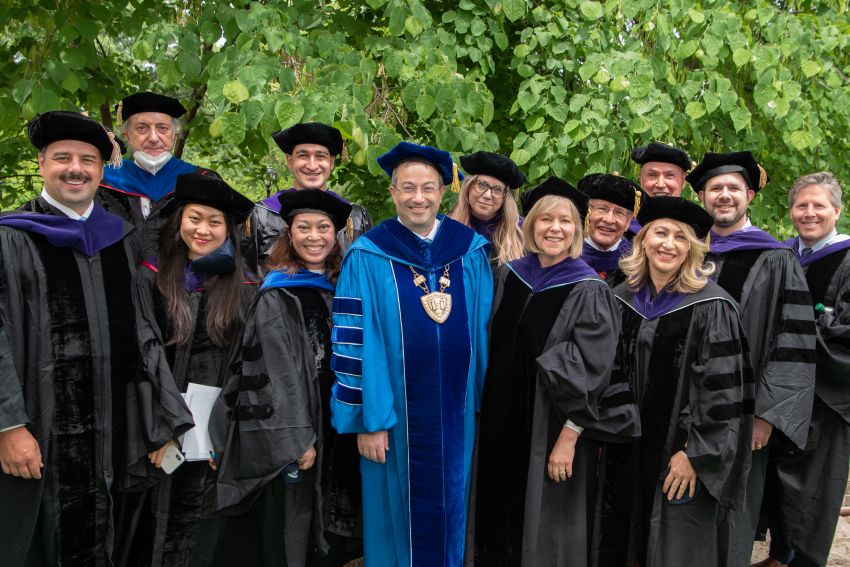 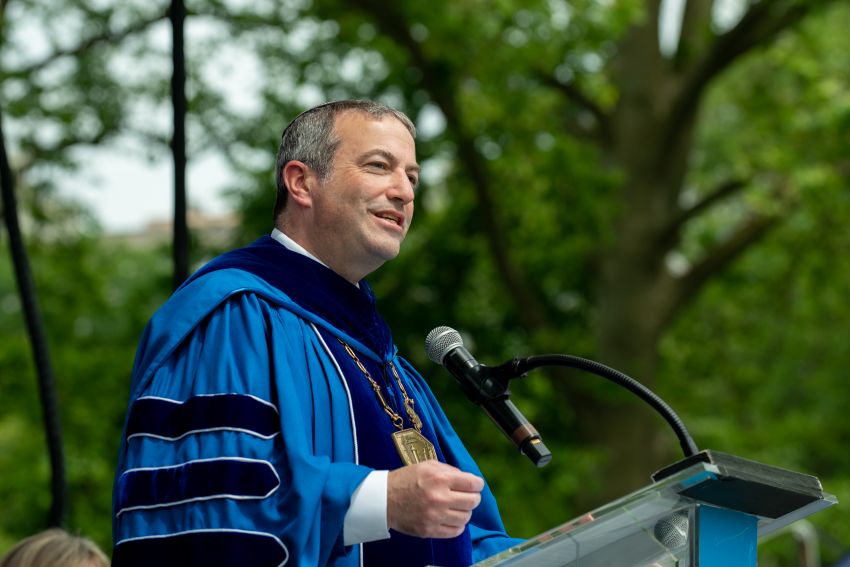 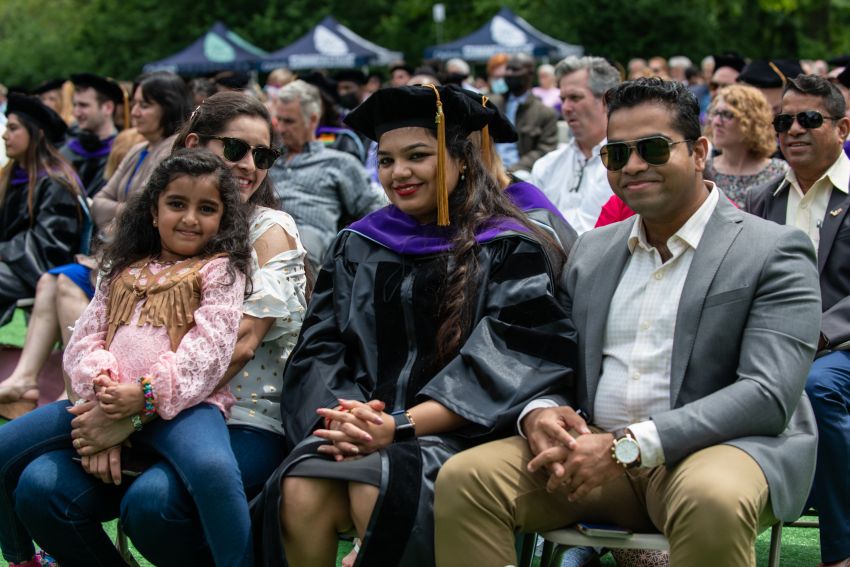 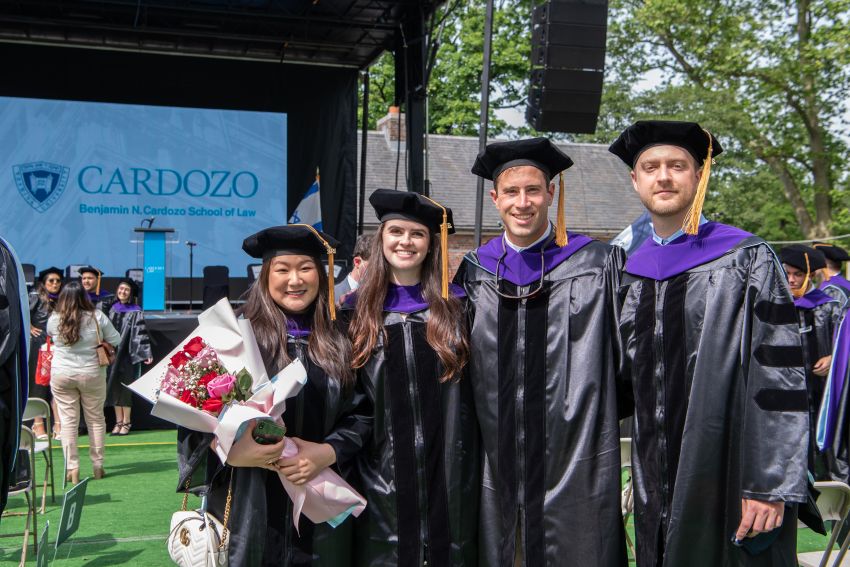 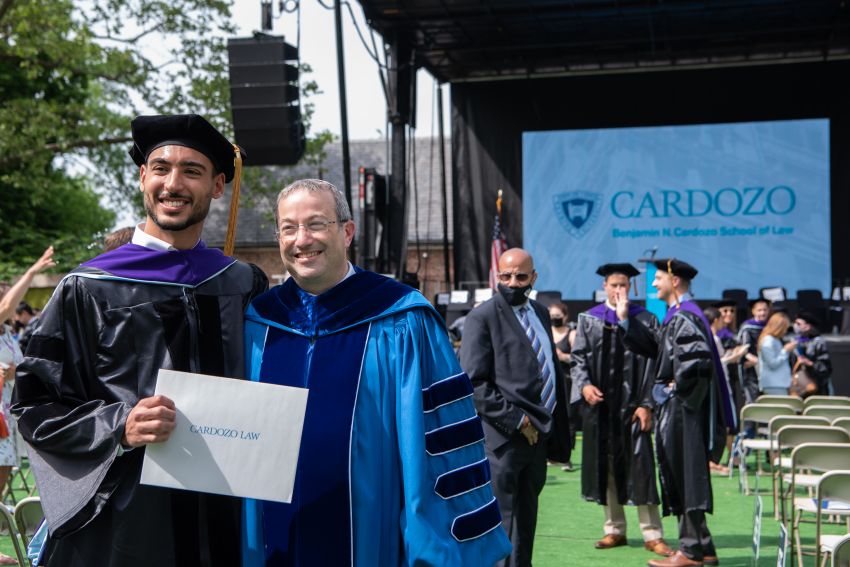