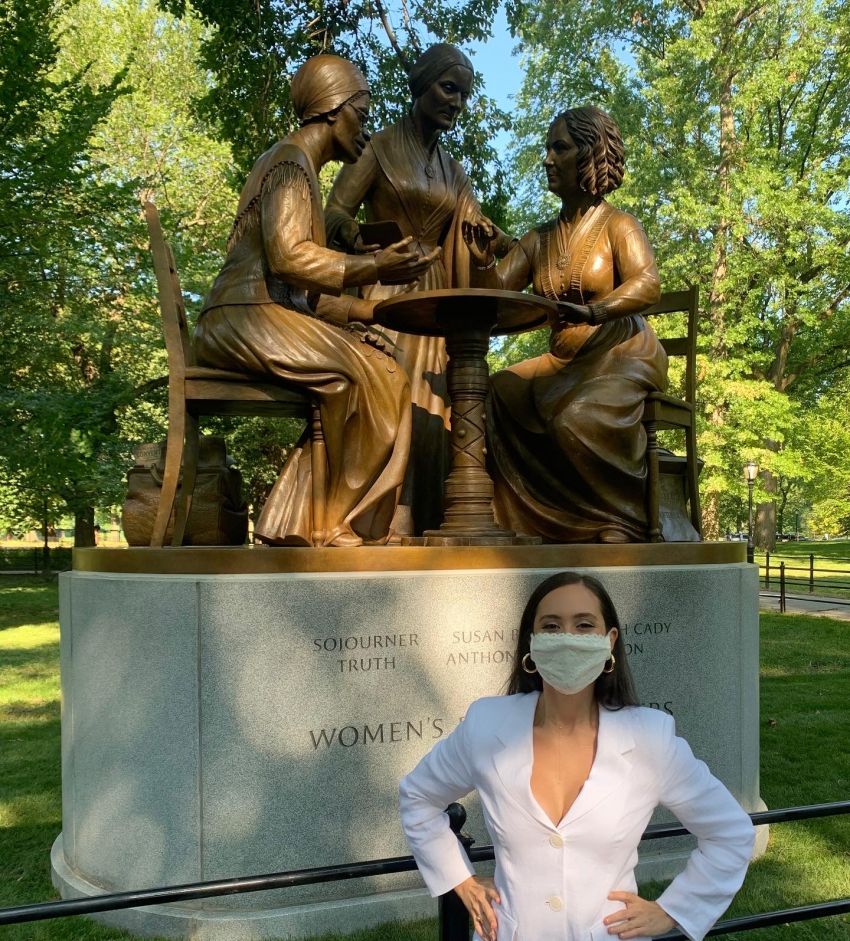 Madison Marlow’s first week of law school at Cardozo coincided with an important milestone in New York City: the installation of a new statue in Central Park commemorating the 19th Amendment Centennial, which represents “real” women – Sojourner Truth, Susan B. Anthony and Elizabeth Cady Stanton. Prior to this, all the statues in the park of women were representations of fictional women.

Marlow attended the unveiling of the statue on August 26.

Marlow, a Cardozo 1L who grew up in Colorado and California, worked in marketing and event planning with Manhattan Borough President Gale Brewer's office prior to starting law school and was part of a team from Brewer's office who helped oversee the statue project.

She worked under the direction of colleague Penelope Cox and the nonprofit Monumental Women, who raised funds for the statue and is rolling out an education campaign for NYC schools about women's suffrage.

Marlow said, “I helped see this statue through its final stages of approval and completion. One memorable moment of working to get the statue in the park was reading a letter of testimony on behalf of Mayor David N. Dinkins at a Public Design Commission hearing. During my time at the borough president’s office I also joined a few meetings with Skadden lawyers to discuss contracts related to the statue. Those are only two examples of the immense amount of work that myself and others put into the process.

Incidentally, the statue unveiling coincided with my first week of law school. Even before classes began, thoughts of, ‘do I belong in law school?’ weighed on me. Impostor Syndrome is common for women to experience in all types of settings and I am no stranger to it. My hope is, when girls and women walk by this monument in Central Park, and observe these three valiant figures, they recognize that they also belong - in a park, on a voting ballot, and in a law school classroom.

Marlow is involved in the Women's Law Initiative and is currently petitioning to run for 1L Section D Senator for SBA. She graduated from Columbia University in 2018.