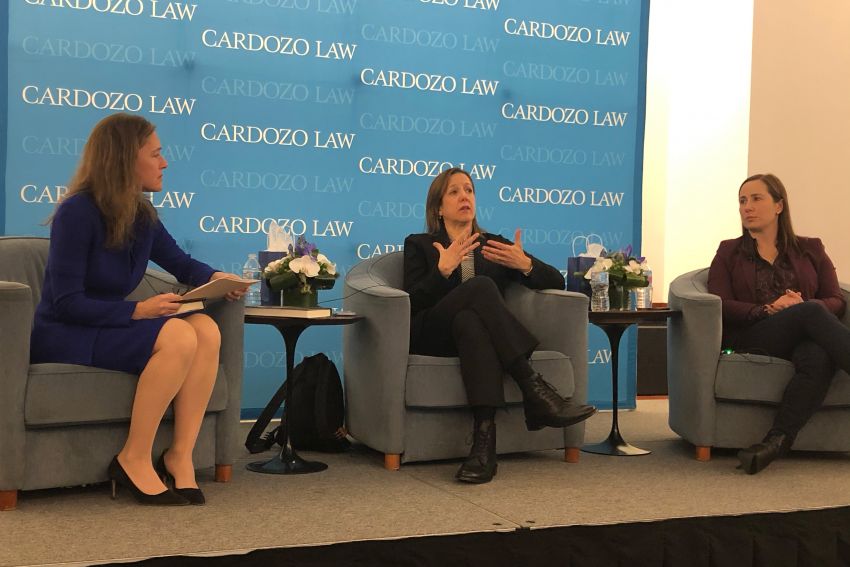 The New York Times reporters Robin Pogrebin and Kate Kelly joined Professor Jessica Roth to discuss their book The Education of Brett Kavanaugh and the questions it sparked about the U.S. Supreme Court Justice’s controversial confirmation. The Jacob Burns Center for Ethics in the Practice of Law sponsored the event.

Pogrebin and Kelly started off by discussing what intrigued them about Justice Brett Kavanaugh’s confirmation and FBI investigation, despite – as Roth pointed out – law not being part of their usual reporting beat.

“There were questions left hanging, strings in our notebooks we wanted to pull,” Pogrebin said.

Pogrebin, who attended Yale University at the same time as Kavanaugh, used her inside knowledge of the prestigious college’s culture to guide her research into the justice’s personal life.

“We overlapped in terms of our social circles,” Pogrebin said. Although she described Yale’s culture as “meaty” and his fraternity as “misogynistic,” she said Kavanaugh was a “closet academic” who was determined to make a name for himself in the legal profession.

“He was plotting his path in a silent but effective way,” Pogrebin said. “[Yale] kind of concentrated his ambitions.”

Roth pointed out the authors' unique roles as journalists and authors.

“I appreciated how at the end your own voices were brought to the floor,” she said, asking about the potential ethical dilemmas that Pogrebin and Kelly faced in their reporting.

“As journalists, it wasn’t our job to determine if he should’ve been appointed,” Pogrebin said.

Kelly said that it was often difficult to convince sources to go on the record about such a sensitive and high-profile topic.

“Obviously we didn’t have subpoena power,” Kelly said, adding that they couldn’t force anyone into an interview.

However, the authors were able to convince Christine Blasey Ford and Deborah Ramirez to speak to them about their sexual allegations against Kavanaugh.

“She was reticent to talk to us but she did,” Kelly said of Ford.

Pogrebin said Ramirez didn’t speak out publicly so she was grateful to have the authors as her voice. Pogrebin said she found both Ramirez and Ford to be credible.

“There’s a pattern of behavior when you have a real predator,” Pogrebin said.

The authors also delved into what the investigation and confirmation revealed about Kavanaugh’s power in Washington, pointing out its brevity and lack of depth.

“This whole thing started in kind of a bipartisan spirit,” Kelly said, pointing out the irony of Republican leaders wanting the investigation to be done “by the book.” “Well, there was no actual book,” Kelly said.

Pogrebin said Kavanaugh’s aggressive conduct during the investigation was more telling than the allegations themselves.

“If you were fighting for your own personal and professional life, what is the appropriate amount of outrage? We leave it up to the reader on where they come down on that question.”

The authors also explored the mental state of Ford during the confirmation and questioned why the lack of detail in her testimony was used against her.

Roth, who previously served as a federal prosecutor, said too many details in a testimony can actually raise flags.

“If there’s a perfect air-tight story, chances are it isn’t true,” Roth said.

An audience member asked the authors what they think the future holds for Kavanaugh and whether his reputation will recover like Justice Clarence Thomas (who faced similar allegations during his controversial confirmation in 1991).

Pogrebin and Kelly said that because of Kavanaugh’s loyalty to his network in Washington, he’ll likely continue as a successful justice.

“If you win, you win and it’s all water under the bridge,” Pogrebin said. But, she added: “There will always be an asterisk next to his name. He’s never going to outrun it.”