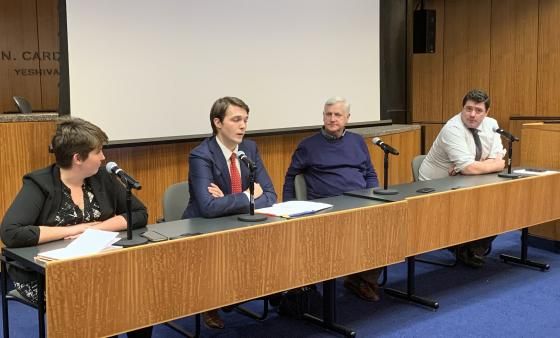 Cardozo's chapter of the American Constitution Society hosted a screening of "Rigged: The Voter Suppression Playbook.'' Narrated by Jeffrey Wright, and shot during the chaotic 2016 election, the film identifies and unpacks a ten-part strategy developed by Republicans to suppress votes that would be cast against them.

A panel discussion after the film featured insightful commentary from Tim Smith, the film's executive producer, Professor Matthew Seligman and John Cusick, a fellow at the NAACP Legal Defense Fund. Isabella Pori, 2L student and President of the ACS Chapter, moderated the panel. "Rigged was an incredibly illuminating film for all who attended," said Pori. "In speaking with attendees after the film and during the panel, it was clear that this film demonstrated a side to voter suppression that many hadn't thought about before. I am so thankful Tim shared this film with us."

A lively discussion followed the film, addressing how to combat voter suppression in New York and around the country. Professor Seligman addressed efforts at the state level to combat partisan gerrymandering, and Mr. Cusick pointed to activists in every state who are fighting voter suppressions in their own states. Mr. Smith shared the Democracy Playbook with attendees, to help everyone at the event fight voter suppression in our own communities.