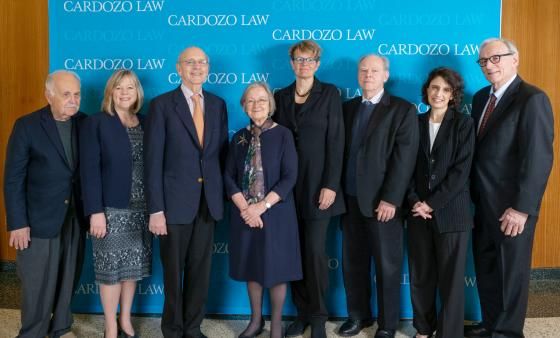 U.S. Supreme Court Justice Stephen Breyer and high court judges from the U.K., Germany and the European Court of Human Rights kicked off a two-day conference on comparative constitutional approaches to civil liberties at Cardozo on March 31.Dean Melanie Leslie welcomed the International Association of Constitutional Law (IACL) in opening remarks on a day dedicated to the memory of the late Norman Dorsen, an innovator in the field of comparative constitutions. The dean noted that, “Norman Dorsen was a good friend to Cardozo Law School,” recalling Dorsen’s work with Prof. Michel Rosenfeld in creating the International Journal of Constitutional Law and in bringing together two other major international conferences at Cardozo over the past 25 years.

Breyer engaged in a lively discussion with the Hon. Brenda Hale, President of the Supreme Court of the United Kingdom, Justice Susanne Baer of the Constitutional Court of Germany and the Hon. Andras Sajo, past vice president of the European Court of Human Rights.

Breyer and Baer even held up pocket-sized versions of their constitutions and the Declaration of Human Rights while offering their approaches to constitutionalism.

Breyer asserted that religious rights are particularly important and heartfelt. “Most of our freedoms come from religious freedoms,” he said. “We are a country of 50 different religions, and we have gradually learned to work together.”

Baer offered an opposing view: “The question that some rights matter more than others… that’s a dangerous path to travel.” Baer added that as a woman and a member of the LGBT community, she often felt that her own interests did not matter.

Prof. Rosenfeld moderated the panel and asked provocative questions focused on issues of proportionality in deciding cases that pit religious beliefs against other individual rights.

Many judges compared high-profile American cases to similar ones on their benches that they’ve faced in times of religious challenges. Hale brought up a U.K. case similar to last year’s U.S. Supreme Court ruling in favor of a baker who refused to sell a wedding cake to a same-sex couple.

In the U.K. case, Hale said a “chap comes into a bakery and wants a bespoke cake,” with a slogan supporting gay marriage. In this case the Christian bakers won based on an argument of “freedom of expression.” She explained that since the message itself was the issue, and the man himself was not being discriminated against, “in our view the shopkeeper has the right not to express that message.”

Breyer discussed his vote in favor of the same-sex marriage case, but also discussed his dissent in other cases. He also made an impassioned call for deciding cases with an eye to administrative law, saying that he favored Archibald Cox’s idea of using “the law and its compass” when reviewing cases.

Baer noted attacks on courts and on the rule of law as a danger that all constitutional democracies are facing. “Why the attacks on courts or constitutional structures? Why do cakes matter?” She stressed that Courts have to make sense of competing claims in a world where there are many of them. “From a German perspective my court is about working together for a consensus.” She disagreed with Breyer’s assertion that religious rights took a top place in constitutional systems.

Sajo took an opposing view. “Other people have the right to secularism,” he said. When approaching cases, Sajo said toleration is a fundamental value: “Which party was willing to behave in a tolerant manner?” He said that proportionality may help move toward a fundamental value of promoting toleration.

Sajo remembered the spirit of Dorsen as an empathetic legal mind and honored him as part of the panel. “Indeed, Norman is with us in a sense.”

Sexton, who wore a Yankees baseball cap in reference to a personal joke with Dorsen, described him as a “protector and hero of the first amendment.”

“Norman had a very soft spot for this school,” said Neuborne. He described NYU and Cardozo as two intellectual institutions that share “an intense commitment to social justice.”

Neuborne said freedom of association was Dorsen’s favorite right, since it celebrated the idea of society agreeing and coming together.

In the judges’ panel, Hale said she was happy to be at Cardozo and that she is fond of quoting Supreme Court Justice Benjamin Cardozo, who wrote, “The eccentricities of judges balance one another. One judge looks at problems from the point of view of history, another from that of philosophy, another from that of social utility, one is a formalist, another a latitudinarian, one is timorous of change, another dissatisfied with the present; out of the attrition of diverse minds there is beaten something which has a constancy and uniformity and average value greater than its component elements.”

The event was co-sponsored by the Floersheimer Center for Constitutional Democracy and the IACL and organized in conjunction with the U.S. Association of Constitutional Law.