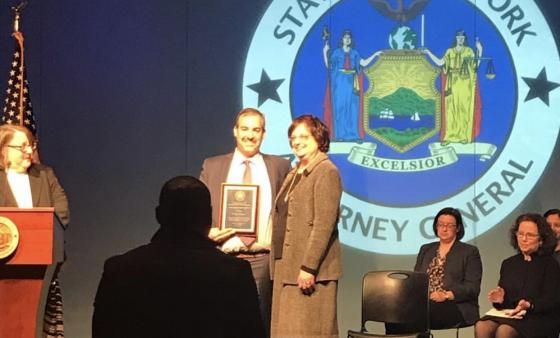 Stan O'Loughlin '07, Assistant Attorney General in the Litigation Bureau at the New York Attorney General's Office, received the 2018 Lefkowitz Award, which is is presented “in recognition of outstanding performance on behalf of the Office of the Attorney General and the People of the State of New York.” The award is named for Louis Lefkowitz, who served as New York's Attorney General from 1957 to 1979.

O'Loughlin received the award in connection with his work in defense of the State in a federal class action in which the plaintiffs alleged (incorrectly) that New York State Thruway had unconstitutionally diverted toll revenue since the early 1990s, in violation of the commerce clause of the federal constitution.

O'Loughlin said, "After a number of dramatic twists and turns, we were ultimately able to show that the 'diversion' was in fact authorized by Congress prompting the Court to dismiss the action in its entirety. The decision was subsequently affirmed by the the Second Circuit in a 3-0 decision. This victory was significant because it saved the taxpayers from potential damages that might have run into the hundreds of millions of dollars."

"It is my honor and privilege to be recognized by New York’s first female Attorney General, Barbara Underwood," said O'Loughlin. "But the lion's share of the credit should go to all of my brilliant and dedicated colleagues, who motivate me every day to renew my commitment to represent the people of New York and uphold the rule of law, and to public servants everywhere, who know that while recognition is nice, good work is the reward."

O'Loughlin worked as a law clerk for the Honorable D. Michael Fisher on the U.S. Court of Appeals for the Third Circuit and at Kaye Scholer LLP before he started work at the New York State Attorney General's office in 2011.