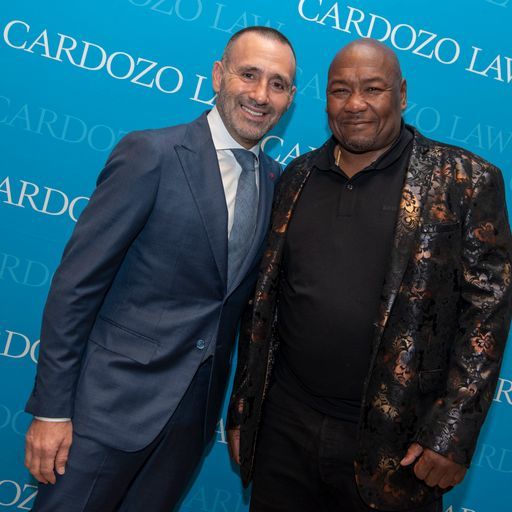 Bryant is 53 years old and has spent 30 years in prison. He was convicted of murder in 1996 when he was 23. He was sentenced to 37.5 years to life in prison. He is a remarkable man with strong family ties who has worked tirelessly in his three decades behind bars to help other incarcerated individuals.  Bryant has earned bachelor’s and associate's degrees, and among his many accomplishments while incarcerated was the establishment of the Civic Duty Initiative, a program that has raised money for gun buybacks  to reduce violence in our communities.

The Perlmutter Center for Legal Justice at Cardozo Law has been representing Bryant since June of 2022 in connection with his clemency effort and with the re-review of his case by the Queens County DA's Conviction Integrity Unit. The Center, along with The Legal Aid Society, will continue to represent him before the Queens County CIU in fighting for his full exoneration.

Josh Dubin, Executive Director of The Perlmutter Center for Legal Justice at Cardozo School of Law, said, “I am absolutely thrilled for Bruce. He is the Perlmutter Center for Legal Justice's first client, and to be part of what was a heroic effort by our Deputy Director, Derrick Hamilton, and our students is extremely gratifying. Bruce is elated, and I have no doubt that he will rejoin society and continue to make positive contributions in criminal justice reform -- just as he has while incarcerated. I want to recognize my co-counsel Steve Zeidman at CUNY School of Law. Steve is an absolute hero and was the driving force behind Bruce's clemency efforts prior to and during our representation of Bruce.”

Dubin added that “we worked tirelessly to fight for Bruce’s clemency and to present his case before the Queens District Attorney’s office, which was very responsive to our efforts in reviewing Bruce’s case. We will continue to work with DA Melinda Katz during the Conviction Integrity Unit’s ongoing investigation into Bruce’s innocence claims.”

The Perlmutter Center for Legal Justice at Cardozo Law was established through a $15- million philanthropic donation from the Laura and Isaac Perlmutter Foundation. Isaac “Ike” Perlmutter is the Chairman of Marvel Entertainment. It trains lawyers in the use of scientific evidence to address the rampant abuse of “junk science” in contributing to wrongful convictions. It also works to obtain clemency for individuals who were unjustly incarcerated as well as those who have served long sentences and are worthy of clemency based on their rehabilitation.

According to a statement from Governor Hochul’s office, “Clemency is a powerful tool that can be exercised to advance the interests of justice and fairness, and to recognize efforts made by individuals to improve not only their own lives but the lives of those around them. These grants of clemency serve not only to acknowledge the steps these individuals have taken to rehabilitate themselves, but to remind others that such change is possible and that nobody should be defined by their worst mistake. I am deeply grateful to the Clemency Advisory Panel for their thoughtful work, and I am committed to continuing our efforts to reform the process to best serve New Yorkers.”

Derrick Hamilton, the Deputy Director of The Perlmutter Center for Legal Justice at Cardozo Law, said, “We are thankful for all the support from our partners in the effort to obtain a commutation of Bruce Bryant’s sentence and his immediate eligibility for parole consideration. We are thankful to the great work of a group of incredible law students from Cardozo Law -- Arisha Andha, Maya Baker, Molly Barth, Jordan Kutzik, Emily Lane, Michael Levitan, Simone Lonas and Yeniliz Peguero. We would also like to recognize the Josh Dubin Fellows at the Shawn Carter Foundation -- Sameillia McFarlane, Jasmyn Murray, Joshua Means, Brittney Thurston and Jaelyn Madrey -- who worked around the clock this summer to assist in investigating Bruce’s case and raise awareness for his clemency efforts.”

Melanie Leslie, Dean of Cardozo School of Law, said, “The Perlmutter Center for Legal Justice at Cardozo Law has done an outstanding job in the first months of its operation. It is an inspiration to our students to see the impact of their work on the life of their client.”

About The Perlmutter Center for Legal Justice at Cardozo Law

The Perlmutter Center for Legal Justice at Cardozo Law is a multifaceted center established through a generous donation from The Laura and Isaac Perlmutter Foundation. The Perlmutters' philanthropy is focused on one clear and powerful goal: helping others.

The Perlmutter Center for Legal Justice has two components: a student field clinic called The Perlmutter Freedom Clinic at Cardozo Law, which focuses on fighting wrongful convictions based on the misuse of scientific evidence and works to obtain clemency for individuals unjustly incarcerated. The second component, The Perlmutter Forensic Science Education Program, will feature an ambitious legal education program in scientific evidence designed for practicing attorneys. The Perlmutter Center for Legal Justice builds on the decades-long success of Cardozo’s Forensic Science College.

Two fierce advocates are leading the efforts. At the helm is Executive Director Josh Dubin, one of the preeminent civil rights attorneys and legal strategy consultants in the nation. Serving as Deputy Director is legal strategist and paralegal Derrick Hamilton, who was falsely imprisoned for over 20 years and won his own exoneration while helping fellow inmates with their cases.