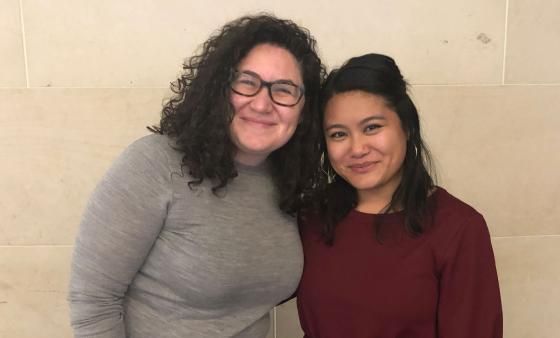 Students in the Kathryn O. Greenberg Immigration Justice Clinic, together with co-counsel at the American Immigration Council (Council), filed a suit in New York federal court last week that could prevent deportation for immigrants with pending cases.

“Our case is challenging the government’s attempts to withhold information about these systemic deficiencies,” said Geroline Castillo, a 3L in the immigration clinic who filed the suit. “These problems deny litigants due process.”

The suit is part of a joint year-long investigation with the clinic and the Council into the way the Board of Immigration Appeals, which is part of the Executive Office for Immigration Review (EOIR), handles requests for stays of removal filed in conjunction with requests to reopen old deportation orders. These requests were intended as a protection from deportation while their requests to reopen their cases are pending. The clinic’s goal is to obtain hard data and records to highlight potential areas of improvement in this procedure and provide guidance to litigants.

“The ability to prevent quick deportations based on old removal orders is especially critical in the Trump era because the administration is now targeting so many people with old removal orders even though many of these people have now lived here for a very long time and often with the government's permission,” Nash stated.

Castillo agreed: “They’ve really built their communities. They’re Americans at this point, they just don’t have the status,” she said.

Clinic students Castillo, 3L Emily Lundgren and 2Ls Rikke Bukh and Yael Ben Tov filed suit with the Council in February 2019 under the Freedom of Information Act, to compel the government to provide information related to stays of removal filed with requests to reopen deportation orders. Students say they have been attempting to obtain such records for months, but the EOIR has largely refused to disclose the requested records or failed to respond.

“We think [the EOIR is] depriving these people of the protections they’re entitled to get,” said Lundgren. “But, when the government is violating its transparency obligations, it is difficult to know what’s going on behind closed doors."

Lundgren and Castillo agree that filing the suit in the U.S. District Court for the Southern District of New York could bring crucial national attention to the issue. The court has 30 days to respond.

“The government is denying these requests without considering the merits of their case,” Castillo said. “We just want to get as much data as possible to to help restore meaningful access to this important mechanism for protection.”