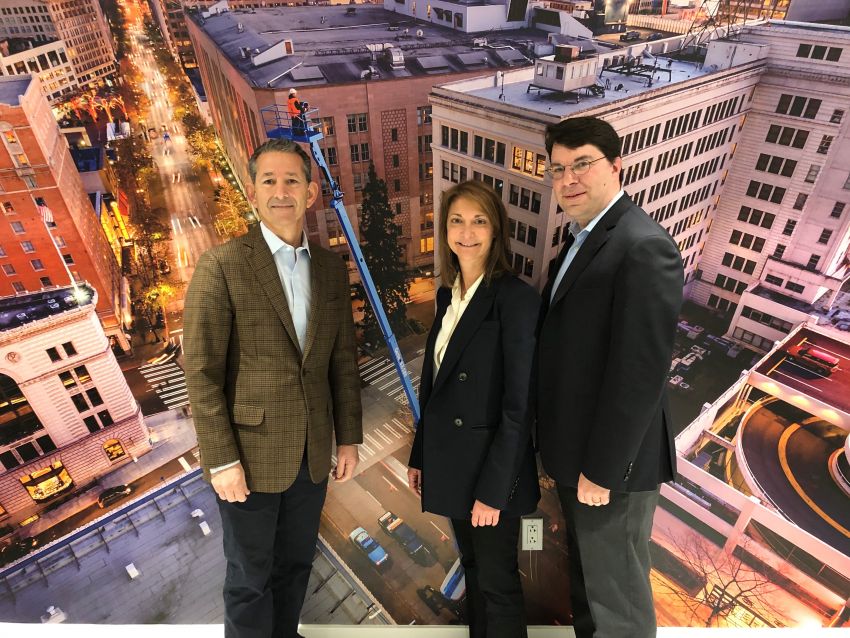 A group of Cardozo alumni round out the leadership team at global manufacturing company Terex – including Cardozo board member Eric Cohen ’83, who recently announced his retirement after 22 years as Senior Vice President, Secretary and General Counsel.

“The Cardozo connection was important for me,” Cohen said. He added that Cardozo alumni are “smart, aggressive, practical and efficient.”

Posner will be taking over Cohen’s position as general counsel. Posner said he will take on more product liability and labor and employment work – and double the number of lawyers he oversees.

Posner agreed: “the great thing about Terex is there is always something new around the corner.”

Because Terex transacts business more than 100 countries, Posner and Babson-Smith are adept at working cross culturally and managing their workday based on time zones.

“No one day is the same, no one year is the same,” Posner said. “That’s what keeps it exciting.”

Cohen and Babson-Smith worked together to set up the compliance program and department at Terex more than 11 years ago. Babson-Smith said Cohen’s support helped her transition from strictly an employment law focus to responsibilities that include more general business, strategy, accounting and financial knowledge.

As compliance chief, Babson-Smith works with team members about conducting business responsibly. When Cohen departs, she will report directly to the CEO in her new role.

Babson-Smith is a founding member of "Women@Terex." “I’ve always been really passionate about diversity and inclusion,” Babson-Smith said. She added that she expects to see a diverse slate when hiring and a diverse representation when meeting vendors. When traveling for business, she makes sure to connect with female employees at other Terex locations.

Cohen added that the manufacturing industry hasn’t historically attracted women. He said Terex has 10,000 to 12,000 employees, 80 percent of whom are factory workers.

Babson-Smith agrees that Terex has evolved along with the changing global economy. “The ability to change and grow here has been tremendous,” Babson-Smith said.

All three Cardozo alumni at Terex have stayed involved in the Cardozo community. Babson-Smith and Cohen taught “Global Leadership in Law and Business for Non-U.S. Lawyers” with Dean of Graduate and International Programs Val Myteberi. Cohen also participates in the ITRANS program with Jillian Gautier, who is the Executive Director of the Samuel & Ronnie Heyman Center on Corporate Governance. Posner was involved in the Heyman Scholars Program and has participated in mock interviews for 1L and 2L students.

Cohen’s advice for Cardozo students is to be willing to put in the work to succeed. Whether it’s photocopying or negotiating, Cohen said “there should be no work that is too low for you to do.”

Babson-Smith and Cohen both agreed that lawyers who are problem solvers become assets to their employers. “Look for alternative solutions, if the one proposed cannot be done” she said. Cohen also emphasized the importance of integrity in everything you do.

Cohen summed up that he sees success as 80 percent hard work and 20 percent luck, “…and the harder you work, the luckier you are.”