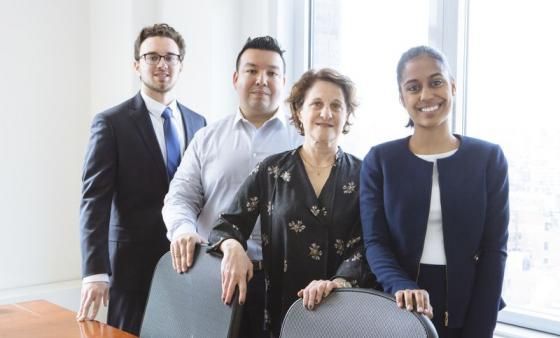 The Bet Tzedek Civil Litigation Clinic announced a $105,000 settlement on behalf of Marine Corps veteran Vincent Acevedo in an employment discrimination action against the New York City Fire Department (FDNY). Mr. Acevedo alleged in his 2017 federal complaint that the FDNY improperly rejected his application for a firefighting position because of his diagnosis of Post-Traumatic Stress Disorder (PTSD). Mr. Acevedo has been represented over the last two years by Melissa Olivo ‘19, Mendel Forta ’19, Corey Hirsch ‘20, and Keith Belfield ‘20, law student interns at Cardozo’s Bet Tzedek clinic, under the supervision of Professor Leslie Salzman.

“Veterans face numerous barriers in obtaining employment after returning from service, and for those with PTSD, misinformation and stigma can be particularly harmful, especially after years of intensive medical treatment,” said Melissa Olivo. “We were proud to win a significant settlement for Mr. Acevedo and hope that the FDNY will reassess its hiring practices and approach cases like this one in a way that is more consistent with the requirements of the Americans with Disabilities Act.”

Mr. Acevedo may be the first FDNY Exam 2000 applicant to file a lawsuit alleging PTSD-related employment discrimination and reach a settlement. Mr. Acevedo is not alone: other veterans with a service-connected PTSD history have also filed charges with the EEOC and asked it to investigate the FDNY’s hiring practices.

“It was devastating to be judged by four letters on a piece of paper rather than on my abilities,” said Mr. Acevedo. “I brought this lawsuit to help smooth the path for veterans in the future as much as for myself, and I hope that, as a result of this settlement, veterans will be evaluated for firefighting positions based on their actual abilities to work on a team and fight fires.”

During the lengthy time period between Mr. Acevedo’s first disqualification and the resolution of his case, he obtained a master’s degree in Industrial and Organizational Psychology and began a new career outside of firefighting.

Mr. Acevedo served in the Marine Corps from February 2004 to March 2009 as part of Operation Iraqi Freedom. After two blast injuries, he was diagnosed with PTSD in 2008, at which point he was honorably discharged and returned home. Following extensive treatment and recovery, in 2012 he began pursuing his dream of becoming a New York City firefighter, placing at the top of the firefighter civil service list and passing the FDNY’s rigorous physical endurance test. But in late 2014, before he could participate in the FDNY Fire Academy, he was disqualified from the hiring process. Mr. Acevedo began seeking legal recourse immediately, and in 2017 was referred to Cardozo’s Bet Tzedek clinic for representation in the U.S. District Court for the Southern District of New York. The final settlement agreement with the FDNY was executed in January 2019.

Click here to read an article about the case in the Daily News.