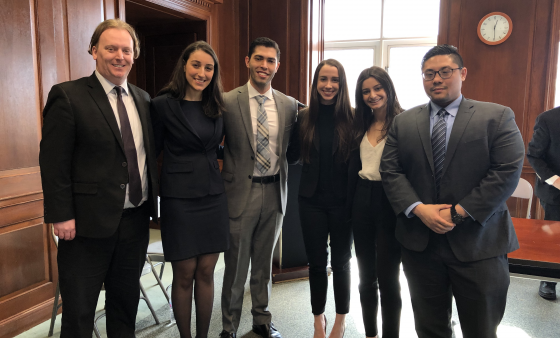 ADR Competition Honor Society students made their mark in recent weeks at several different competitions, both at home and abroad.

Two Cardozo teams made it to the semifinals round of the 2019 Fordham National Basketball Negotiation Competition, an interscholastic negotiation competition hosted by the Fordham Sports Law Forum, on February 22 and 23. The competition consisted of head to head negotiations, with negotiation problems that are based on real world scenarios relating to the NBA.

2L students Zachary Brooks, Dean Linn, Danielle Tuluca, and Yarden Sivan represented Cardozo in the competition. The team was coached by faculty advisor Professor David J. Weisenfeld and Cardozo 3L students Samantha Cooper and Matthew Greenfield. “The competitors and student coaches were simply amazing, especially in the later rounds, where they got a new fact pattern and had to analyze it, come up with a negotiation plan, and implement it, all in the space of a few hours," said Professor Weisenfeld. "You never know how someone will react to something new, or to a tight deadline, and they all rose to the occasion.”

Cardozo 2L students Lauren Cohen and Hannah Katz won second place at the 2019 Regional ABA Representation in Mediation Competition on February 24 and 25. The team was coached by 3L student Derrick Ng. This year, the competition was hosted at Cardozo, organized by the ADRCHS with the help of faculty advisors Donna Erez-Navot and David J. Weisenfeld.

The competition introduces law student participants to the challenges of representing clients in mediation. Judges reward those participants who use an effective combination of advocacy and problem-solving. Participants must balance their clients’ interests with the goal of achieving an effective settlement.

“Hosting this year’s ABA Regional RIM competition was a tremendous opportunity for the ADRCHS to demonstrate its enthusiasm for dispute resolution and elevate its visibility throughout the region. We are so proud of our competitors and staff members for their hard work,” said Nicholas Anselmi, ADRCHS Editor-in-Chief.

More than 100 students competed in the annual Cardozo Intraschool Negotiation Competition on March 12, hosted by the ADR Competition Honor Society and Kukin Program for Conflict Resolution. This competition introduces law students, primarily first-year students, to the challenges of representing clients in a negotiation.

53 teams from around the world competed and the Cardozo team was one of five teams to advance to the semifinals in both the Mediation and Advocate-Client Rounds. Additionally, Deluwara Ahmed won the Third Place Best Individual Mediator Award.

"The Cardozo INADR contingent had a wonderful time in Athens!” said Ahmed. “We competed amongst 53 teams from across the world. It was an invaluable experience to learn about perspectives on mediation in different nations and to see a global commitment to mediation embodied amongst all the participants and judges."

The tournament provides law students with the opportunity to learn about various forms and techniques used in mediation, as well as the opportunity to practice their mediation skills in friendly competition with other students from around the world. Teams of three students each go through three preliminary rounds serving as mediators, as well as advocates and clients. Mediators work in pairs, with a co-mediator from a different school.