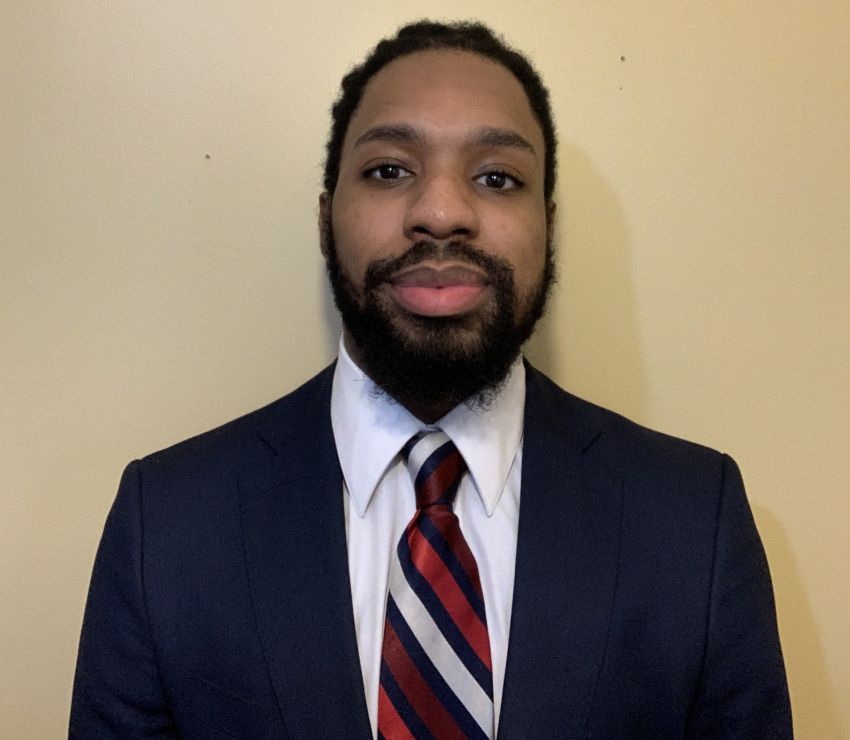 When 2L student Jhaton White found out last week that he had been elected as the first Black Editor-in-Chief of the Cardozo Law Review, he said, “my dad called me a legend and compared me to Barack Obama. He still hasn’t stopped and It’s kind of sweet. My mom was really excited as well. We hugged, she told me how proud she is to be my mother and that she knew I would get the position. We also had a quick dance party in the kitchen, then I had to jump on Zoom and join Volume 42’s election process.”

White says being elected to this role has tremendous meaning for him for two reasons. “The first,” he said, “is representation. For the first time, Black students are seeing someone who looks like them at the head of Cardozo’s prestigious law review. I hope that me being the first Black EIC of CLR lets Black first-year law students know that they are also capable of achieving this. CLR went from having no Black staff editors to having its first Black EIC, a Black guy from the Bronx, NY, and if I can do it, I want Black law students to know that they can too.”

“The second reason is access,” he continued. “The Black experience is a very unique experience and with that comes unique insight, which I hope will be reflected in my work as EIC. Being passed over for opportunities and experiencing various microaggressions because of your race helps you understand the importance of equity and parity. So being the first Black EIC means that I can use my unique experiences to diversify not only the scholarship that CLR publishes, but also the authors that we publish as well.”

When asked why he wanted to go to law school, White said, “I grew up idolizing lawyers. I have a first cousin on my dad’s side who has been a lawyer since I was born, and I remember being in awe of how smart he sounded whenever he spoke. I’ve also watched more law and crime shows than I care to admit. But what solidified my interest was going to school in Albany where I had the opportunity to work with lawyers, judges, politicians, community organizers, and community-based organizations. Through those experiences, I realized that learning the law is comparable to learning another language. And the prospect of learning their language and existing in their world instilled a sense of passion in me. At that point, I knew I had to go to  law school.”

White says his goals for the Law Review include bringing parity and transparency to the Writing Competition, which is why CLR Vol. 43 is introducing a new event called Journal Week, which will debut on April 5. This is a five-day event designed to expose first-year law students to the work of Cardozo’s journals and to provide an introduction to the Bluebook rules relevant for the Writing Competition. “Journal Week is our way of leveling the playing field,” he said, “especially for those unfamiliar with this type of legal writing. This approach should also increase the competitive nature of the Writing Competition, which could strengthen the overall applicant pool and provide journals the opportunity to be staffed by the best candidates. His second goal is to make CLR’s election process earlier, “so we are on par with other elite journals. By the time a new CLR board is elected, some other journals have already elected a board, transitioned, and opened and closed their submissions process. This means that CLR could be losing out on great articles because of the timing of our elections process. Our journal’s ranking is directly tied to the number of times we are cited, so access to the pool of articles that are submitted prior to when our current submissions process begins could mean access to new and interesting legal scholarship.”

White has advice for 1L students at the start of their journey: “Be patient with yourself,” he said. “Everyone doesn’t figure law school out at the same time. And just because you aren’t with the first group that figures it out doesn’t mean you will never figure it out. It’s ok to make mistakes, but please ask for help when you need it. One of the wonderful things about Cardozo is that so many people are invested in your success. So find your community and support each other the entire way because you are going to have plenty of late nights studying the law, but it’s a bit easier when you’re doing it with people you care about and who care about you.”

White, who is Jamaican-American, was born and raised in the Bronx and credits his family as being his most important influences on his life, urging the importance of academics and he credits them with his academic success. He attended SUNY Albany for both undergraduate and graduate school, majoring in criminal justice and sociology and ultimately receiving a master’s degree in criminal justice. His favorite topic in law school is tax law, with property and securities law tied for second. He participated in the Securities Arbitration Clinic and BLSA and outside of law school, he is passionate about health, wellness, Black liberation and criminal justice reform (to the extent that reform is possible).

“I am very excited to explore different areas of the law,” White said about his summer plans. “While at Fried Frank, I hope that I have the opportunity to explore their various practice areas. Of particular interest are: real estate, tax, trust and estates, asset management, and litigation. I know myself though—I'll give this list now and end up exploring so many other practice areas while I'm there. I'm glad I picked Fried Frank because they are well-respected in the legal community and they care about their employees. They had an incredible response to the racial civil unrest of last summer, and their efforts are ongoing, which means a lot to me as a Black law student. In addition, the firm prioritizes health and wellness in a meaningful way and actively encourages their attorneys to work on pro bono matters. I know I am going into big law, where the hours are long regardless of the firm, but I picked Fried Frank because it meant taking aspects that I loved about my previous nonprofit experiences with me to the firm. My decision was reaffirmed when the Chairman of the firm reached out to congratulate me on becoming EIC. How often does that happen at a law firm?”